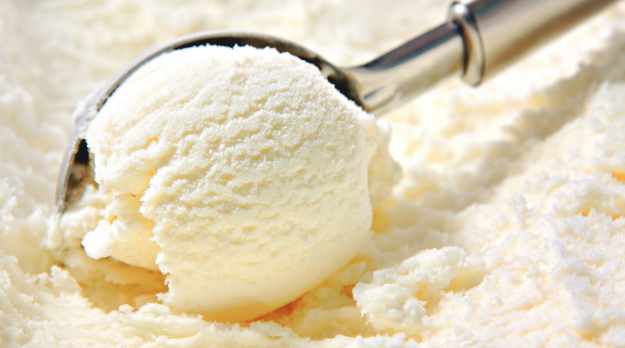 The summer after my first year at college, I had to find a job. It would be a minimum wage job and there weren’t many listed in the want ads. Each day, I would dress up and go fill out applications at places like the Hallmark Card Shop, Golden Corral Steakhouse, K-Mart and Eureka Door-to-Door Vacuum Sales. At last, a friend recommended me to the ice cream store where I found it was possible to work summers and vacations throughout the my college years. It also led to a situation that seems unthinkable for someone who loved rocky road ice cream and had free access to an entire ice cream store. Because of this job, another ice cream flavor edged out all others as my favorite.

Shocking, I know, but hear me out. At this store, we had a grocery section selling the Goodrich ice cream, milk, yogurt and eggs. Then there was the ice cream counter. The display case held strawberry cheesecake, butter brickle, peanut butter chocolate, apple pie, mint chip, rocky road (I’m giving them to you in order of appearance, because I still remember!) and half a dozen other varieties. At the soda counter, we made malts and banana splits.

This job also had a number of interesting and in some cases macabre elements to it:

During the break in our 7-hour shifts, we could eat unlimited ice cream. Like any normal person, on my first shift, I picked out my three favorite flavors and made a hearty sundae. By the end of three weeks, I could eat no more than a small single scoop of ice cream at a time and it’s been that way ever since.

But there’s more: My top 3 favorites –– rocky road, strawberry cheesecake and peanut butter chocolate –– got edged out by something else.

Because, once a week, we would roll out from the deep freeze a five-gallon cylinder of vanilla ice cream. It was not just a carton, no, this was a metal container, the kind your fingers stick to, about three feet high. We would lift this gem into a special tempering freezer, a little less cold than the display cases. And, this freezer was conveniently out of sight from customers.

It would sometimes be my turn to go into the backroom and ‘dip malts’ from this specially-tempered treasure. It meant using a serving spoon to scoop out the exact amount of ice cream needed to make a malt. Each spoonful would go into an individual cup that would then be at the ready when the buses arrived. Don’t ask me how I know this, but that vanilla ice cream was absolutely delicious and the perfect consistency, so delectable that, yes, to this day vanilla is my favorite ice cream.

We often say in marketing that we differentiate our businesses through our product, people or process. Well, I believe that, intentionally or not, we differentiate ourselves not only to customers but also to our internal people and our affiliates. Even though this was a job where I would just work summers and vacations, it left a lasting impression on me because of the store’s product, people and process. What lasting impression are you making on your helpful people?