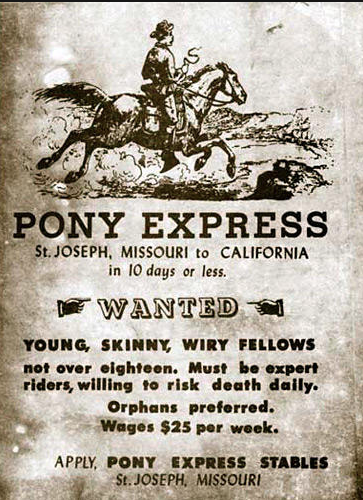 ‘Orphans preferred,’ the sign at the St. Joseph, Missouri, stables that launched the Pony Express riders proclaimed. Though without meeting that qualification, I did actually get a job there … 130 years after the Pony Express’s brief run. Because one of my first jobs (except for a few other gems, including the one doing singing telegrams, which may explain why I no longer like to sing in public) was at the Pony Express Museum in my hometown. Though very much on the forefront of new ways of doing things in the 1860s, and a jumping off point for those going on the Oregon Trail,  the St. Joe I knew growing up had taken a dive. So it was all the more exciting to learn from my dad, who holds down the family fort there, that a coworking site is opening and, even better, St. Joe is becoming known for its entrepreneurs. It also helped me realize what hasn’t changed about work in 160 years. Coworking there and at our new site, CoWork 414, in Bethlehem is a new plot twist in an age old story.

For many years, there was a billboard on I-36 outside of St. Joe. It welcomed visitors to the place ‘where the Pony Express began and Jesse James ended.’ Yes, just up the street from the Pony Express Museum is the well-preserved little house where the Civil War era robber met his demise. James was the subject of a rob-from-the-rich, give-to-the-poor myth. (I first heard the story from my grandpa, who insisted an anonymous traveller, later discovered to be James, rewarded members of our family in the far distant past with a $20 gold piece for giving him a place to stay overnight.)

Yet James departed for his Maker while standing on a chair hanging a picture in his home – the one now on display. It was a member of his own gang who pulled the trigger. The story has always seemed to me to have such an air of finality, not only for James, but for the city. That incident and the Pony Express riders, whose time in the transcontinental sun, snow, and sleet was brief, have been reenacted ever since. I’m glad St. Joe is getting known for something new.

According to SiliconPrairieNews, (move over Silicon Valley) in 2014, ‘St. Joseph was named No. 5 in the nation for startups by the U.S. Census Bureau,’ quoting Kristie Arthur, Director of Workforce Development for the city’s Chamber of Commerce. She added, ‘We’ve been researching ways to bring a coworking space to St. Joseph ever since and are happy that it’s about to open.’

That’s good news. St. Joe and other cities across the country, including my own adopted city of Bethlehem, have a lot to offer. In addition to being affordable, they offer easy access to nature. Drive five minutes and you are in farmland. Five more minutes and you can hike along a river or follow a hill trail. But I was working in that museum for a reason: I love history and whether the stories of the people are your game or architecture is, there’s lots to see and appreciate. Examples around these two cities: the outdoor amphitheater in Krug Park in St. Joseph and the Moravian Buildings and Main Street, Steelstacks and the Southside in Bethlehem. 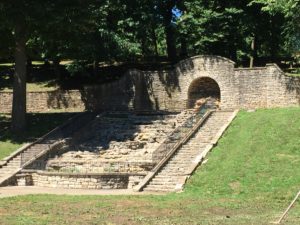 Because, for cities of 75,000 – Bethlehem and St. Joe are comparable in size – coworking is still relatively new. Not so for entrepreneurship. Lately, a few people have mentioned to me that entrepreneurship is a temporary state that quickly ends when someone gets offered a job. But I think there is a significant portion of people for whom it ‘sticks.’ Having left a job to become a writer and marketer (it’s working, in more ways than one!) ‘getting a job’ isn’t that appealing right now. And that holds true for other entrepreneurs (let me hear from you!).

Maybe that’s the key to the new economy; those two little words, ‘right now.’ Yet that’s what hasn’t changed about work in 160 years. Remember that sign seeking orphans – oh, and they had to be ‘skinny,’ too, so the ponies could carry them and the mail across some 2,000 miles including mountains to Sacramento, California. Well, the ones who made it were out of a job in just 19 months.

Why? Technology. Sounds familiar, doesn’t it?

At least, it seems like the railroad at last being able to cross the entire country counts as a technological feat. It was at the very least an engineering, supply chain, and flex worker feat!

Yep, then as now, adaptability of workers is key. That’s what hasn’t changed about work in 160 years, too. What coworking sites offer, and strangely so given their ‘flex’ qualities, is something that the immigrants and orphans risking their lives and perhaps even the entrepreneurs Russell, Majors and Waddell (did not have to look that up; in my mind, I can still hear the museum’s recording) didn’t have: Steadiness. A ‘home base’ for taking a chance as a sole proprietor or entrepreneur, oh, and picking up work on the side as a freelancer, oh, and still doing work for the company that used to be your employer.

Is this you? What are you looking for in a ‘home base’ for your worklife right now? Ever hold a job that would be a good subject for our Work Chronicles blog? Tell us what it was in the comment section below or send us an email to start the conversation!

1 thought on “My Job at the Pony Express: What hasn’t changed about work in 160 years”