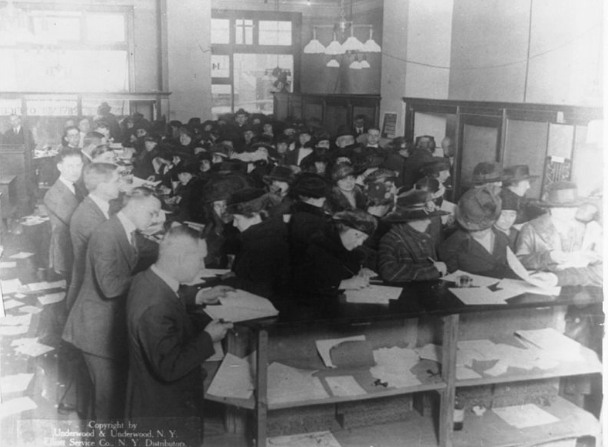 Tax day, 9 a.m. I’m clearly interrupting breakfast at the Pennsylvania Department of Revenue. Business owners pay the price on tax day each April — the double whammy of annual and quarterly payments due today. Yet there are no other members of the public visiting the brand new facility this rainy morning. A protective window above the service counter keeps me at arm’s length but also allows me to see the workers at their desks. I count several meals in progress — hmm, salad dressing with breakfast, interesting. One person has apparently reached dessert. Nevertheless, a smiling woman comes to speak with me at the window.

‘I didn’t receive my estimated tax payment vouchers from the state this year and the ones on the website don’t look familiar, would you help me?’

She googles and prints a stack of forms but says she does not know how to complete them. Her colleague approaches the window.

‘This looks different from the vouchers I’m used to,’ I tell her. ‘May I go over this while I’m still here in the office?’

At her barely discernible nod, I proceed, ‘So in this first box, it looks like ….’

Surprised, I look up. Apparently my preface to my questions (should there be any) was too much for her. I’m not being dense (am I?), just careful about getting this right. My thoughts race ahead to all my share will help pay for … state programs, health insurance for children, revenue offices and all they contain …

Yes, although, following her sigh, we calmly got through the business at hand (in less than a minute), I admit to having left that office with negative feelings. As I drove, my indignation grew. It felt humiliating to bring on that big sigh while doing due diligence. And isn’t 9:00 just a little late for breakfast anyway?

‘I’m so glad not to be an employee anymore, would rather be independent, just as I am,’ I thought over and over.

Being a writer, though, it’s impossible to let myself off the hook before we get to the real deal. Someone told me recently that other people’s negative energy will pass right through you unless there is something in you that resonates with it. The same goes for dealing with difficult teen children: What we find frustrating in them probably maps to our own personalities — like the guy who’s always been negative towards authorities, wondering why his child is getting called to the principal’s office.

Certain situations just seem to put us at odds, making strangers of us. If anything, it felt like I was the one behind the glass at the tax office, the oddity, the only one who couldn’t get her act together and instead had to bother these nice people. And they were nice (except for the sigh); they didn’t have to be.

Once, on an airplane, my infant son had finally fallen asleep on my shoulder, the one near the aisle. The steward brought the drinks cart along and parked it right next to us. ‘Would it be possible to move it further along?’ I asked him. ‘I don’t want my son to get bumped or woken up.’ I smoothed my baby’s back and then glanced up just in time to see the steward make a mocking face toward his colleague and lift his hands in a ‘what’s next?’ gesture. Yet I’d been oblivious of any faux pas.

His only response to me: ‘No one’s ever asked that question before.’

In those days, I worked for a tax agency (ironically) and was just moving into the writing realm; I tended toward the passive, so made do by shifting my son around (no doubt thinking it would serve the guy right if his noisy ice cubes led to half an hour of crying baby for him to listen to).

Since then, I get that comment, ‘no one’s ever asked that question before,’ pretty often and it is usually accompanied by gratitude. It’s something to take pride in as an interviewer and writer. (Terry Gross and Deborah Solomon are my role models.)

Driving away from that tax office, I framed up the question that, after the fact, I wished to have asked: ‘Is this too much for you? I’ll be happy to speak with your boss if so.’

But no, that’s not the question. With the first thought that flew up from me to meet her sigh being about who was paying whose salary, it’s clear I felt under-appreciated. So she probably did as well. That’s why we resonated. Yet conflict means engagement, and where there is engagement, there is room to improve.

Now I wish I’d started that interaction with, ‘Thank you for being here; I appreciate it and I’m glad not to have to wait, even though it’s tax day. We’re lucky. Would you be willing to listen while I review what I’m supposed to do here?’

And so, once again, a business owner pays the price on tax day — this time by taking other people for granted and ending up with sore feelings. But we are talking taxes after all. So there’s always next year.

Click here to read another of our Work Chronicles.